Timelines is a collection of works that question the meaning and representation of images, particularly in terms of their computer and algorithmic processing. The compositions also look at the relationship between sound and image, by creating synesthetic effects that link sight and hearing.

The collection focuses on the process of hybridisation and the multitude of possible futures like the many shades that an image may contain and the many ways of looking at it.

The 100 pieces comprising the work, Multicosm, are the result of a hybridization process that combines images representing nature, such as animals or landscapes, with images from the technological or industrial world. Each piece illustrates, in its own way, the fusion between nature and artifice. They therefore provide abstract glimpses of possible futures of the Anthroposcene. Algorithmic abstraction is used on images that exist in an alternative world, one featuring non-linear interpolations between two real-world images. The easiest path from one image to another is the fade. From an algorithmic point of view, this path is far from being the most interesting. Along other paths, there are hybrids, some of which are recognizable, others which are completely abstract and give rise their own realities.

A similar hybridization was used to create Relative Radiation Nine. First, a hybrid image was obtained halfway between two portraits. This image was then enlarged in nine different ways using algorithmic abstraction, giving rise once again to representations of different possible futures. In some of these images, part of the hybrid image remains, while others are entirely abstract.

A set of three paintings, The Metaphysics of Funk, BW2 and Pink Punk, have been taken from the Pohutukawa collection, which was created using a single image of a tree. The pieces are works of pure algorithmic abstraction in that each one, while conjuring a different reality, was created using the same building bricks, with no trace of the original image. The three paintings trade the organic aspects of the plant world for a rectilinear rigidity, as if nature itself had been forced to bend to the laws governing the digital world. 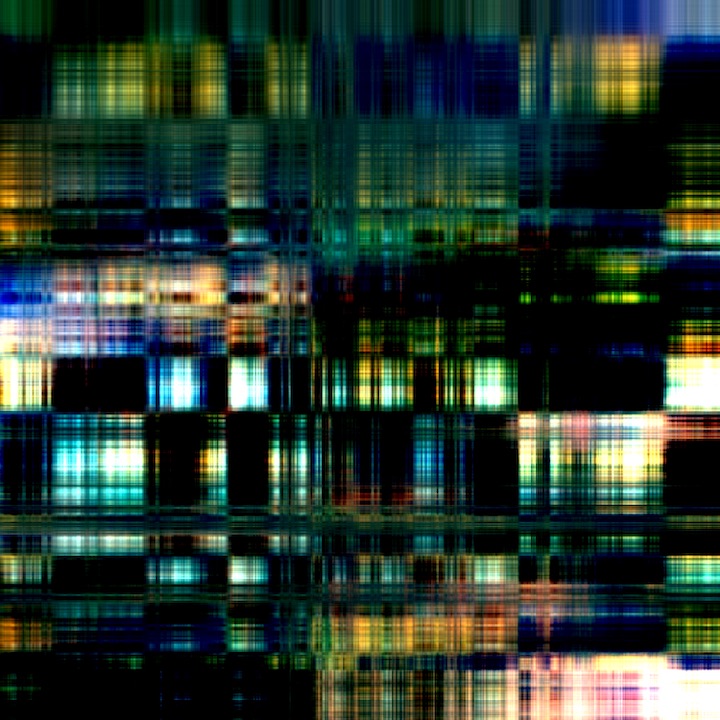 Music, and more generally sound environments, evoke the emotions that we are also used to seeing in the form of images. The main source of metaphors that enable us to talk about music is directly linked to the way in which we perceive and imagine our own bodies. Numerous musical terms are clearly connected to active verbs, which in turn are connected to the body’s primary functions. The idea behind the two large drawings, Du bout de la pensée I and II, and the painting, Écumes, is to reverse this process by using synesthetic persistence and by exploring its triggers in the absence of sound, while creating a temporary sound impression in the audience’s imagination.