Data Sonification in the arts and sciences

https://ooo.szkmd.ooo/algorithmics/
Data sonification is found virtually everywhere, whether it be in microwaves, vending machines, electronic clocks, data transmission equipment or metro doors. Its practical purpose is to notify an action (or the end of one) in an intelligible manner, so as to convey information to active or passive listeners. With this mechanism in mind, we could, in principle, envisage a sonification process in which a series of scientific data would be scanned to determine whether or not it contained an interesting result. The aim, here, would be for us to use our ears instead of our eyes as a sensory organ to make an analysis. This procedure does not necessarily require any further processing compared with the standard method of displaying results. It simply requires a different way of thinking about the processing of results and the application of a different set of conventions.

The sonification of data in the arts does not always entail the same type of conventions as those needed to sonify data for practical purposes. Artistic language tends to go well beyond the pragmatic sharing of information, insofar as it touches the emotional spheres of the human psyche. However, data do not convey emotions. This is only possible through their interpretation. When a person listens to Kate Bush's "Pi", they are not focusing on the use of the decimal places of Pi in the composition of the song. Music can create a sense of wonder in individuals in terms of the infinite nature of this fundamental number, although not at the number Pi itself.

Depending on whether the purpose of data sonification is scientific or artistic, there is an a priori bias as to what can be expected from the outcome. Scientists assumed that they would find the Higgs boson in the petabytes resulting from the collisions that took place at the European Organization for Nuclear Research (CERN). The data were therefore filtered in order to highlight certain areas that reflected specific needs. But what could we expect to hear if we sonified the data from particle collisions? A soundtrack from a 1980s science-fiction film? Some kind of unidentifiable white noise? The sound of God? Or perhaps all of the above all at the same time...

Daniel Maszkowicz (Daniel Siemaszko) currently lives in Sainte-Croix in Switzerland, and is a research engineer, independent film curator, pluridisciplinary performer, composer and producer. Having worked as a scientist at CERN, he has collected multiple sound recordings from completely unique equipment and machines that he encountered while wandering around the laboratories and through the tunnels on site at CERN. He is now working as a research and development engineer in power electronics for Hitachi Energy.

As a musician, he works with the multidisciplinary artist, Nat Cilia, as part of the electroacoustic jazz duo, INFLUUT, as well as for the theatre show, INTUITIO, which combines music, cinema and body language. He is also working with the sound artist, Emma Souharce, on an orchestra comprising obsolete laboratory function generators that have been connected to form a primitive analogue electronic installation entitled Biblioteq Mdulair. In his solo project, Kosmoscore, he uses SuperCollider, a programming environment for music, to produce spatial sound performances and installations using high-voltage electricity. His music aims to create an enveloping and hypnotic atmosphere with synchronized low-frequency beats, which result in a natural brainwave immersion with multiple binaural effects. His marathon performance, Cosmic Sleep, has been played several times at sleep concerts and sound naps.

Daniel Maszkowicz has presented his work across the globe, both at conferences and in galleries, and has contributed to several original soundtracks and publications. He is currently working on an algorithmic musical composition for spatial sound performances and installations. He gives seminars and workshops on the practice of data sonification using Python and SuperCollider, and applies an approach that combines science and art, thus giving voice to both the engineer and the artist. 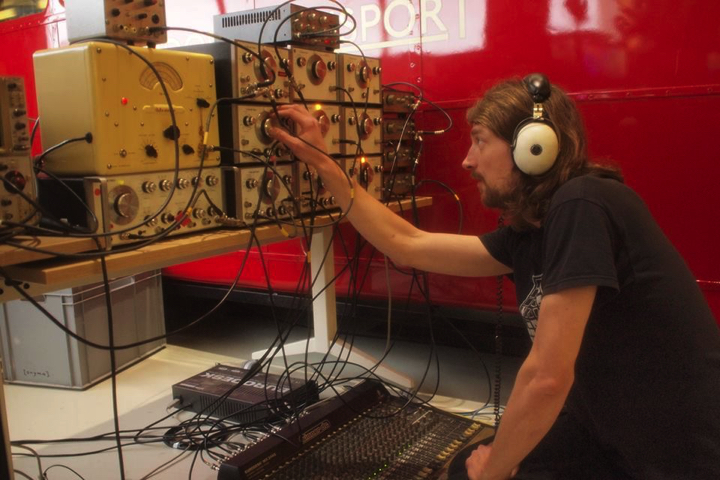